When Did Citizens Become THIS Ignorant? 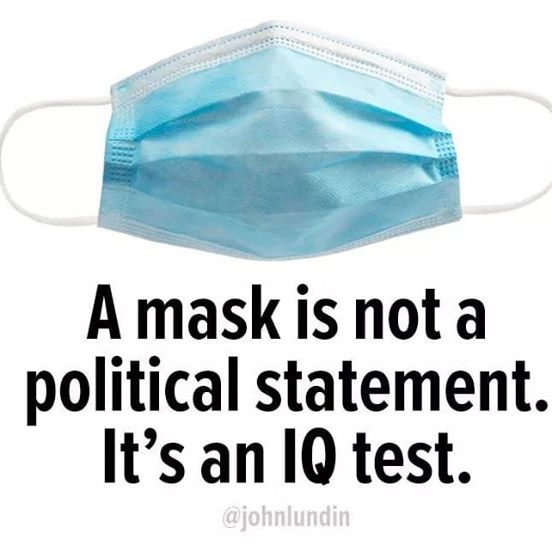 Here in Washington State, mask-wearing in public is now mandatory as of two days ago. Those who refuse to wear masks are guilty of a misdemeanor.

Lisa and I went bike riding from Orting to South Prairie on Friday morning. Naturally, we didn’t wear masks while riding our bikes, as we were physically separated by more than six feet at all times. But they were tucked right under our chins, so we could pull them up as soon as we got to places where crowds of bikers would be, like at Trailside Espresso.

At Trailside, not a single person who came in from the bike trail or the highway was wearing a mask, and none were in evidence under their chins. And there were at least 15 people there from the trail and, while we ate and drank our meals, at least ten cars pulled in to place orders.

I didn’t see any hand sanitizers on any of the tables, either.

So, there is one place where a police car could park and the officer could fill their quota for a month in a single day, just handing out tickets with the fines associated with the misdemeanor and start gathering revenue hand over fist, all while enforcing the law…

(You know, the “law and order” regulations that so many Trumpsters and GOP’ers supposedly swear by except when they want to throw a tantrum and declare their right to infect everyone around them in support of their “liberties”).

I don’t know who created this meme, but whoever it was NAILED IT!

But Trump and his administration appears to be keenly into democide. (Wikipedia Definition: “a term proposed by R. J. Rummel since at least 1994 who defined it as “the intentional killing of an unarmed or disarmed person by government agents acting in their authoritative capacity and pursuant to government policy or high command”. According to him, this definition covers a wide range of deaths, including forced labor and concentration camp victims; killings by “unofficial” private groups; extrajudicial summary killings; and mass deaths due to governmental acts of criminal omission and neglect, such as in deliberate famines, killings by de facto governments. This definition covers any murder of any number of persons by any government.)

Whether the present democide by COVID is intentional or merely the fallout from gross incompetence at the top is, I suppose, debatable, but there’s at least anecdotal evidence that some of it is intentional:

Jared Kushner, Trump’s son in law and the minion Trump put in charge of the distribution and deployment of personnel and materials  during this pandemic, reportedly sent PPE (personal protective equipment) and ventilators to red states (and even to Russia!) while denying it (or sending expired, damaged, incomplete or useless PPE) to blue states. The Trump administration even reportedly pulled back PPE and counter-bid against the blue states, driving up prices and forcing them to seek PPE and equipment outside the US surreptitiously so Trump’s minions couldn’t interfere.

Did Faux Noise cover this? Apparently not, because Trumpsters don’t believe it–or if they do, they condone and endorse it.

What’s very Darwinian about the whole thing, though, is that by refusing to wear masks or take precautions, Trump supporters are infecting their own tribes and reducing the number of people who will be here in November to vote for their fuhrer again.

The bad news is that they’re also related to people who haven’t drunk the Trump/Pence kool-aid and who will inevitably come in contact with them unless they treat them like the potential disease vectors (Typhoid Mary’s) they are, which is admittedly awkward as hell!

I find myself feeling suspicious and extra-cautious around my younger sister’s family, workers and friends because I don’t know how many of them have drunk the kool-aid (she’s a Trump supporter but she is wearing masks when she goes out in public, but not here at home when others arrive to work or visit–nor do they), so I don’t know what precautions they’re taking to remain virus-free when they aren’t here. (They sure aren’t taking any precautions that I can see while they are here.)

I steer clear of them as best I can and I sanitize all common touch areas in my side of the home as soon as they leave (and sometimes in between): doorknobs, light switches, sinks, counter tops, etc.

It has gotten ridiculous. The facts are clear and incontrovertible: wearing masks saves lives. So why isn’t everyone wearing one when they’re out and about?

Does someone in their immediate family have to die or suffer long-lasting health challenges from it to prove to them the threat is real?

I sure hope not!

Aren’t more than 125,000 US deaths from COVID and more than 2.5 million confirmed cases (God only knows how many more unconfirmed cases there are!) sufficient evidence that this is a killer virus?

Wear a face mask. Wash your hands. Don’t go anywhere you don’t need to go. Take yourself out of the loop so your likelihood of surviving increases.

Don’t be afraid. Just be wise. Do what the CDC and health care professionals on the front lines recommend.

It is THAT EASY to save lives.

Be an unsung hero, not an unmitigated heel.