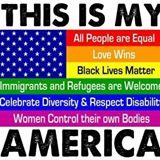 I wonder at what age I began to separate myself from the “prevailing wisdom” of my family members.

As kids, we’re exposed to all kinds of nonsense that we accept as confirmed truth simply because we don’t know anything different; we only know the viewpoints and behaviors of our nuclear families and a few others in our orbits.

Although my parents weren’t racist in the way I thought of racists in those days–foul-mouthed, slur-slinging, loutish, lynch-happy ignorant white supremacists (we were a Pacific Northwest family)–some of the conversations and jokes I heard and remember most from my dad’s brother and from my dad’s majority-white working partners grated on me…which is why I remember them at all, I suppose.

My Uncle “Red” (his nickname, because he had red hair) was a longshoreman when Kennedy–a much-reviled Catholic President in lots of circles–was in office. And Uncle Red’s in-laws, the Rineharts, were virulently anti-Kennedy and racist.

Uncle Red would repeat racist poetry that was spouted on the docks after President Kennedy started cracking down on police brutality in the South:

Tend to your work

With vim and vigor

Or you maybe replaced

When Kennedy was assassinated, Mrs. Rinehart brought me a magazine that she or someone she knew had received as part of a subscription for my memorial collection, and commented, “He wasn’t worth the dynamite it would take to blow him to hell, in my opinion.”

And Mr. Rinehart at one time said within my hearing, “I love (black people). I think everyone should own at least one.”

And there were constant gripes about what the Puyallup Indians were up to; “they  think they own this damn’ place.” (Uh, yeah…they did at the time, right up until 1989!)

White people seem to have a major problem akin to a panic attack when people of color have something of real value, especially if it exceeds the value of what “we” have. “Why, it just don’t seem natural!” (Of course it doesn’t. We took away nearly everything take-able from most people of color so long ago that finding a few who still have something, or who manage to acquire something, seems strangely unusual!)

But back to the thread I started with. The slurs I heard and the pathetic poems weren’t things I was hearing from my parents’ lips.  The only thing I ever heard from my Dad that seemed racist early in life was when he bellyached about how militant Blacks were becoming. “I don’t have a problem with black people. I was with a black family the night you were born. But I do have a problem when they start to make demands.”

What he left unsaid, I now realize, was probably along the lines of, “We all have our places in life. It’s just the way things are. Our family is (white) working class and struggling financially, too, but we don’t go out and demand anything better. We just work harder.”

I countered with, “But, Dad! If you were treated the way they’re treated, would you just be quiet about it and let it keep happening? What’s happening to them is wrong! The color of someone’s skin doesn’t make them any less human or in need of the things we all need!”

I don’t think he countered that. If he did, it’s lost to memory.

And even as an adult I heard (and still hear) tone-deaf slurs by family members.

When we were buying this place, one of my friends, a realtor, who is a Messianic Jew and wears a cross and a Star of David, stopped by to give us some pointers about negotiation or whatever, and my sister made the comment (about selling her other place), “I don’t want to get jewed down by a buyer: I want what I want. It’s well worth that.”

My mouth flew open. I was flabbergasted!  She didn’t even realize what she’d said.

And here’s yet another painful memory:

Dad was a well-regarded general contractor and was much in demand by chain restaurants McDonalds, Carl’s Jr., Uncle John’s, IHOP and even SAMBO’s — a now-defunct racist-conceived or themed restaurant chain — to build, upgrade or remodel their bildings.

When I was in Arizona working with my parents on a restaurant remodel site, we stopped alongside the road during a weekend sightseeing tour of ancient Indian kivas and other sites to view the wares of Native Americans, who had set down blankets and rugs and placed various types of jewelry, carvings, and other hand-crafted goods on them to display them for sale.  Dad dropped into some kind of pidgin-English he’d heard from classic westerns to address a Native American woman who was sitting near the goods.

“You makee yourself?”  he asked.

I cannot tell you how far I wanted to be from my nuclear family members when stuff like this came out of their mouths.  I wanted to disassociate and beam up! It was excruciating!!!!

The woman replied in perfect English, “Yes. I made everything you see here.”

Apparently her clear, cogent, unaccented, grammatically correct response didn’t register because just moments later, he asked her, “How mucha you want this?” (picking up a beautiful turquoise squash blossom necklace).

“Just shoot me now. Let this all be over…”

And now I sit here pondering. What made the difference between my viewpoint in life, at a very young age, and theirs, even later into their lives?

Was it book reading?  Neither of them enjoyed school, did very well while there, or went  to college. (My dad never got  past 4th or 5th grade… maybe 6th… before he went to work to help his family during the Great Depression.)

Was it empathy, the ability to put myself in someone else’s shoes (as a result of the book-reading I was so fond of–thank you, Mom and SCHOLASTIC!!!)?

Was it emotional intelligence, the ability to enter another’s emotional/psychological world and regard it as every bit as real as my own?

Is it because I’m not as humanoid-centered as they were/are, and I can even see things from the viewpoint of a pet, a wild animal, or a domesticated farm animal?

I don’t know.  I just know that I’ve been super-sensitive to how other beings react and why they react as they do.  Although I know I’m not experiencing the exact same emotions or feelings they are (animal or human) I’m able to get close enough that I can sense and begin to actually experience their anxiety, discomfort, pain, or agony.

A single look, or the slightest change to someone’s body language, can do it.

I don’t know why everyone can’t do it. I can understand why everyone might not want to do it: because then, some of what they do would seem mean, unfair, or cruel, and no one wants to feel crappy about oneself… even you know who: the man and minions  who occupy the Oval Office, apparently most of the GOP, and far too many corporate DEMS as I write this piece on June 10, 2020.

But many people need to revisit and analyze what their brains have absorbed since childhood. Its unconscionable to me that we should still be fighting the same battles that were fought in the 50’s and 60’s and during all eras before that. We shouldn’t be stuck here. We know better. We’re the (self-professed and self-exalted) “highest form of developed consciousness”, remember?”

There have always been social justice champions, all along the way, fighting for equity, for the right to vote and to control our own bodies and lives.

You can’t have a Constitution and a Bill of Rights that applies only to white, land-owning white supremacists. Not anymore.

Life, liberty and the pursuit of happiness and equal justice under the law is for every American.

The debate as to who should benefit chiefly from their citizenship and labors may continue with the ignorant and the already-comfortable white middle class and upward, but it’s beating a dead horse for everyone else.

We’ve tried marginalizing and misusing and abusing our essential workers… not just today with COVID, but always.

One nurse said, “People call us heroes, but we’re being treated like (offerings) martyrs.”

Without sufficient PPE and without the rest of us doing what we can to limit their exposure to our viruses and germs when we avail ourselves of their services, we’re basically deeming them expendable.

Why do the oligarchs, plutocrats and corporation want to throw open the economy before we have a vaccine or reliable treatments for COVID that ensures high survival rates for those most debilitated by the virus?

Because they NEED their worker bees on the front lines

so they (the elite) can continue to sit at home

or in their ivory towers watching “expendables”

make them their money hand over fist.

They sure as hell aren’t going to stand there themselves.

And that would be unacceptable!)

It’s time to watch the Star Trek episodes The Cloud Minders  and Let that Be Your Last Battlefield again.

We shouldn’t be where we are still. We’ve known for a very long time that America is better than this. Hell, all advanced countries are better than this ALREADY! We’ve become the laughingstock of the world (or perhaps just the pitied among allies–thank you!).

Let’s get rid of the knuckle-draggers and obstructionists in Congress and elsewhere and create a country worthy of its Constitution, its Bill of Rights and its people!!!

THIS sure ain’t it! 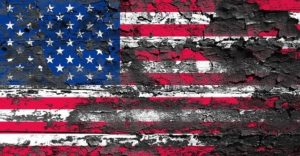