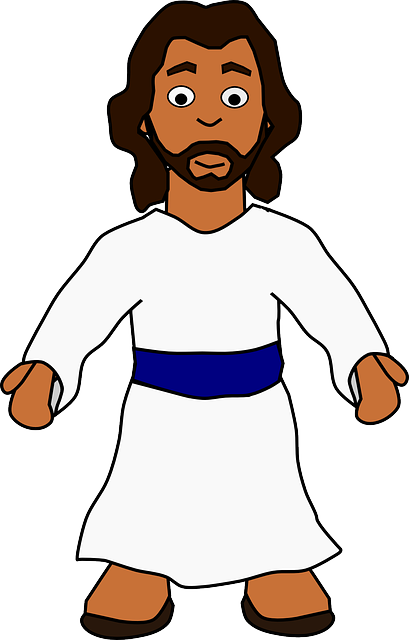 I’m no longer a Christian (that is, I no longer believe Jesus is the son of God or that he rose from the dead–I’m still a huge fan of his parables and sayings, though!) so I have no dog in the fight.

But I do have a bone to pick with “Republican Jesus” and with any other people who think we need to become a theocracy based on Christianity or on any other religion.

There’s a meme floating around on Facebook that goes something like this: “When someone tells me they’re a Christian these days, I always ask, ‘Classic Jesus or Republican Jesus?'”

I have a real problem with Republican Jesus. Classic Jesus, not so much.

Classic Jesus was all about protecting and defending “the least of these,” “loving thy neighbor,” “turning the other cheek,” taking the plank out of your eye before attempting to take the speck out of another’s eye… I could go on and on.

Republican Jesus seems to be mostly about telling women what they can and cannot do with their own bodies, making the rich richer, and getting the rest of us to accept our sorry, struggling lots in life like good little martyrs because they know what’s best for us and Jesus never promised us a rose garden here on earth.

They have made a golden calf out of Donald J Trump and his fascist henchmen and rolled them out to the masses as God’s chosen ones to lead us to salvation as a nation.  (Excuse me while I take a moment to gag here.) 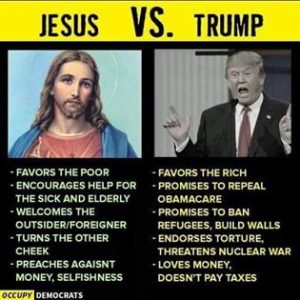 The Bible has been hauled out by tyrants and control freaks alike to justify women’s subjugation, slavery, rape, incest, genocide, democide, environmental and animal sacrifice, and a whole host of other human and natural atrocities ever since it was penned by the patriarchs of old whose cultures determined the “insights” they believed they were receiving from God.

The patriarchs of old are no more reliable disseminators of God’s will (if there even is a God)  than are Franklin Graham, Paula White, Pat Robertson and their ilk/cult.

Every religious person has a huge plank in their eye.  They have an agenda and the power to establish cults–hence the reason there are hundreds of Christian denominations instead of just one.

Morality and ethics aren’t based on religion. Our sense of right and wrong (justice and injustice) were part and parcel of our human awareness before religion came along.  We know when we’ve been afflicted by another without justification. We’re a reasoning animal — and a rationalizing animal (which is a subject for another blog post, I suppose.  We can rationalize anything. And we do).

It doesn’t take Jesus, or Buddha, Confucius or the Pope or any of their peers and adherents to tell us when we’re behaving like pre-moral toddlers (unless we’re mentally challenged or sociopathic).  By the time we reach an age where self-reflection is possible, we know when we’re being insensitive, cruel, ignorant (that is, ignoring what’s before us) or just plain lazy about the way we engage with life and others.

We have the power to reeducate ourselves if we were led as sponge-like youngsters to being racist, sexist, xenophobic, homophobic or any other thing that creates a wall between us and other planetary citizens.

Many of us choose to do the work; many others are either too fearful or unmotivated to consider taking the planks out of their eyes so they can see others as equally deserving of respect and consideration.

People want to be celebrated, not just tolerated.

Just about the only beef I have with the Southern Poverty Law Center is their course titled, “Teaching Tolerance.”

I don’t want people to settle at tolerating others: I want them  to pursue knowing others well enough to understand where they’re coming from, especially when they appear, at first blush, to be “scarily” or “wondrously” different than they are.

I want to immerse myself in the wonder and in the worry of their lives.  What keeps them keeping on in spite of systemic oppression and opposition?

I feel the same way about Jews and other marginalized/vilified communities. What keeps them keeping on?

Their resilience inspires me.  It makes the marginalization that I’ve faced as a perceived woman and transgender individual seem pale and puny by comparison. But my marginalization has chapped my hide and threatens to make me bitter and militant at times.

The African Americans and Mexicans and Jews and Muslims I know don’t seem bitter or militant. They just keep on keeping on. I’m awed by them, inspired by them, encouraged by them.

I know the moral arc of the universe bends toward justice but “how long, oh Lord?” do we have to wait to see equal and humane justice for every marginalized individual?

Is it a pipe dream?

It’s what I strive for, every day.

The human Jesus, if we can believe the screeds handed down, seems to have had it right.  He was a radical thinker and doer in his time and place.

He would be today, too.

(As it so happens, not much has changed, sadly, despite 2000 years of “Christian teachings.”)

Republican Christians would crucify him again.

The rest of us would recognize and embrace him, even if he remained brown and Middle Eastern.

I don’t think he’s coming back. I think that’s a myth.

But we could really use Classic Jesus right now!