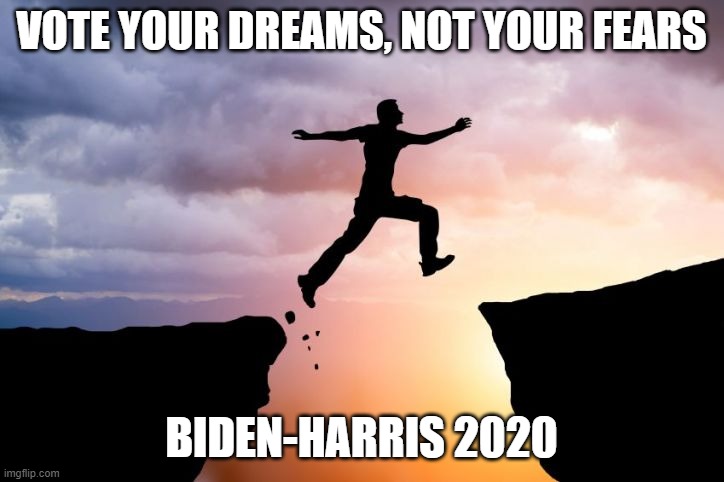 In a bizarre dream I had this morning, I convinced my Trump-supporting sister to reconsider her upcoming vote.

The sad part was waking up, because I know it could never happen in reality. She is too fear-driven, and watching Fox Noise and Sean Hannity (who has said off the record that Trump is “batshit crazy”) like a fanatic keeps her that way. I can’t get her to turn it off or to add additional resources to her repertoire.

She is also a racist… or else deeply suspicious of people of color… I’m not sure which. (But only white people have hurt and betrayed her, so I don’t get it!)

I know she’s afraid or racist because of things she said while she was working at a bank.

“I need to buy a gun.” (Really?! More people get killed by their own guns than get killed by intruders: suicide, homicide, accidents, etc.)

Decades ago, she’d come home fuming about “foreigners” who had immigrated to the U.S. who were getting government help to start a business while she was struggling as a single mom to keep a roof over her head and her son fed.

But she’s white, kept doing the work she loved (banking) for more than 30 years, and saved money like crazy while also spending it at times like it was water. So she was the recipient of white privilege that people of color can’t even imagine, and yet she says she struggled.

Although white people (especially women and people assigned female at birth, like me) can indeed struggle because we don’t usually get paid the same as men for the same work (and our ever-present home duties are unpaid), we don’t struggle in the multi-faceted way that people of color do here in the U.S., given the constant racial slurs and systematic under-valuing of their paid services that deem them “other/lesser” instead of simply melanin-enhanced.

The only foreigners (and citizen people of color) I’ve ever known and interacted with work their asses off sixteen hours a day, seven days a week to make it here in the U.S. . Why? Because as people of color, they don’t get the automatic privilege of being seen as anything but interlopers and “business stealers.” If the government has to help them, I have no beef paying into the system to help them succeed–or anyone else working that much whether it’s in one job or three.  Minimum wage should be at least $15/hour across the nation. Hard-working people deserve to succeed!

I’ve seen her treat people of color like play things, shoving them around “playfully”. (Asserting her dominance.) I’ve seen her treat Asians, service providers of color or different ethnicities and other essential workers with disdain and impatience, as if she thinks she’s better or worthier of respect than they are. (I DON’T GET IT! I NEVER WILL AND I DON’T WANT TO. IT’S ABHORRENT TO ME!!!)

I’ve heard her say she wouldn’t hire people of color because if she ever had to fire them, they could pull the race card on her. (That’s racism right there–automatically pre-supposing  worse-case scenarios about them, instead of assuming she’d make a stellar hire and never have to worry about firing them.)

And she enjoyed the live play La Cage au Folles right up until the two guys kissed at the end. “I don’t know why they had to go there. It was disgusting.”  (Really?! Kissing–showing affection and love–is disgusting? SMH… Humping might have been a bridge too far for a live adult play, but kissing?!)

Given all this (and more, which I won’t divulge), I guess I can see why Trump is her guy, so it doesn’t make sense to try and talk her into ridin’ with Biden. She has never voted DEM and never will.

She resonates to the Party of White Male Cisgender Supremacy. (Take a look at GOP interns and DEM interns; the difference will be stark. The GOP hires white blonde female Barbie dolls almost exclusively (if not exclusively). The DEMs hire a diversity of individuals.) She truly thinks they’re protecting her from the people that they’ve convinced her she should be very afraid of. People like her “sister” (brother): ME! (She’s not afraid of me. She just won’t acknowledge my truth because that seems to threaten her, just as her beliefs and stances on LGBTQI and other policies threaten me and far too many of the people I have known and cherished during my lifetime.)

So what if the GOP is sexist and misogynistic and never voted to give her equal pay for equal work. Never mind all that. She thinks her Golden-Haired Calf and his ruthless policies are her ticket to earthly safety, when they are exactly the opposite. The GOP doesn’t care about her. Doesn’t. Care. About. Her. (I do! Deeply!) She isn’t rich enough, or fuckable enough, to give her a second thought. They want her support and her money, but that’s all. They do what they do for themselves and their big money donors.

When she came home from work one day, I told her the anecdote about the woman who re-named her company Men with Pens and immediately started making money hand over fist.  I said, “That’s insane! To have to misrepresent herself as a man to make as much money as a guy for doing the exact same work.”

Jackie said, “Welcome to my world” (where male bank VPs make a lot more than we women do).”

I desperately wanted to say, “That’s because you don’t fight for equity. You go along to get along. That’s insane, too, you know!”

Because Jackie is Jackie. Named after dad, she’s almost as unread and uninterested in learning more as he was.  She’s not stupid— she’s far from stupid!!!! — but she is obtuse (“annoyingly insensitive or slow to understand”) and (very unlike dad) cowed (“frightened into submission”).

She ignores and never explores other options or perspectives; she goes along to get along with her overlords, fearing the outcome if she doesn’t–and that same fear sabotaged her at the end of her career, too; she shoulda sued them, but didn’t.

I love my little sister  like crazy. I just wish she wasn’t so afraid of the boogeyman. If she’d look at Trump through a clearer glass, she’d see he’s true DON (a mob boss), an Antichrist, the least like her savior Jesus as any human being I’ve ever encountered in my almost 70 years of living.

And she’s going to vote for him again. A great many Republicans have said he’s a bridge too far, and they will vote for Biden instead.

That’s my well-considered opinion based on facts, not fake news.