Roger D. Noriega and Daughter Are Flying Up to Spend the Day 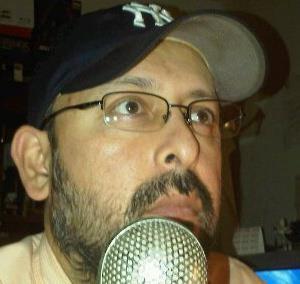 September 1, 2021 / Comments Off on Roger D. Noriega and Daughter Are Flying Up to Spend the Day

My most recent interviewer, Roger D. Noriega, and one of his daughters are flying up from Los Angeles to spend the day with me here in the Pacific Northwest soon. How cool is that?!!!

Roger and I go back to at least 2009 as compatriots. I think that’s the first time he interviewed me, but we knew of each other before that, too. We’re both huge Star Trek fans, so this isn’t surprising.

We’re also social justice advocates, although he says he’s more on the conservative side than I am.   I think that’s funny, because fifty years ago I was a Robert F. Kennedy fan, whom few on the truly far left considered much more than a mid-level liberal, but who, of course, was proclaimed a wild-eyed socialist, or even a communist, by racist Southerners because he sent in Federal support to quell the violence that was occurring against Black people in southern states as they began to protest and persist about their right to be viewed as equal members of humankind, and to vote.  (As you may or may not recall, when his brother, President John F. Kennedy, was assassinated some southerner — and doubtless others — celebrated, saying “Somebody shot the n-lover. Good for whoever did it.”

RFK was an advocate for farm workers, indigenous populations, and Black Americans; to this day, many Latinx, Native American and Black families have photos of RFK on their walls. With ten kids of his own (and one on the way when he was assassinated), he could never view any child, of any complexion, as less deserving of love and opportunity than anyone else.  I feel the same way, and I always have, as far back as I can remember.

I thought that by the time I turned 50, all the racism and marginalization would be behind us, a shameful relic of a shameful past. Yet here we are in 2021 (and I’m 70!) watching white supremacists do everything they can to limit the ability of Black and brown people to vote in their states and in federal elections.  It boggles my mind.  I feel the way Mark Twain did as he neared the end of his life. He wrote, “Some call me a pessimist in my old age, but I’m not. I am an optimist who did not arrive.”

But back to Roger! He has been a volunteer poll worker for as long as he’s been an adult,  except for last year when something sidelined him, much to his chagrin. (I think it was COVID, but I can’t recall right now.)

He’s a delightful human being, and when he flies up in a couple weeks, I will have my first opportunity to actually break bread with him in person and spend about six hours with him and his daughter before they need to be back at the airport for their flight out.

Originally, their plan was to fly up for the Mariners game against Arizona (the teams are honoring Hispanic Heritage Day that day) but he soon realized after confirming both flights (in and out) that his flight out would pull them from the game midway through, and that could drive someone crazy, so he decided to forego the game to hang with me.   I feel awful that he won’t be there for Hispanic Heritage Day, because he should be, but it was his decision to forego the game when he learned I’m in the same neck of the woods, and I’m certainly not going to complain!!!

I don’t know if we’ll come back here to my place to hang.  It’s COVID Country up here right now, so having  meal at a restaurant is off my To Do list for the foreseeable future.  I don’t know if he wants to see my De Kelley archives, but doing that would take longer than four hours (the RT between my place and Sea-Tac Airport is about an hour), so I don’t know what we’ll end up deciding to do.  Perhaps visit the Woodland Park Zoo (on a weekend? eek!!! People-y!!!) and wander around the outdoor exhibits there?  I simply have no idea.  But we’ll come up with something to do. Or not.  We’re both talkers, so maybe that’s all that’s required or expected!

Anyway, I’m super excited and looking forward to my half day with “Admiral Noriega”!   I’ll try to remember to take some pictures so I can post them here later.