Roger and Me (Not the Documentary) 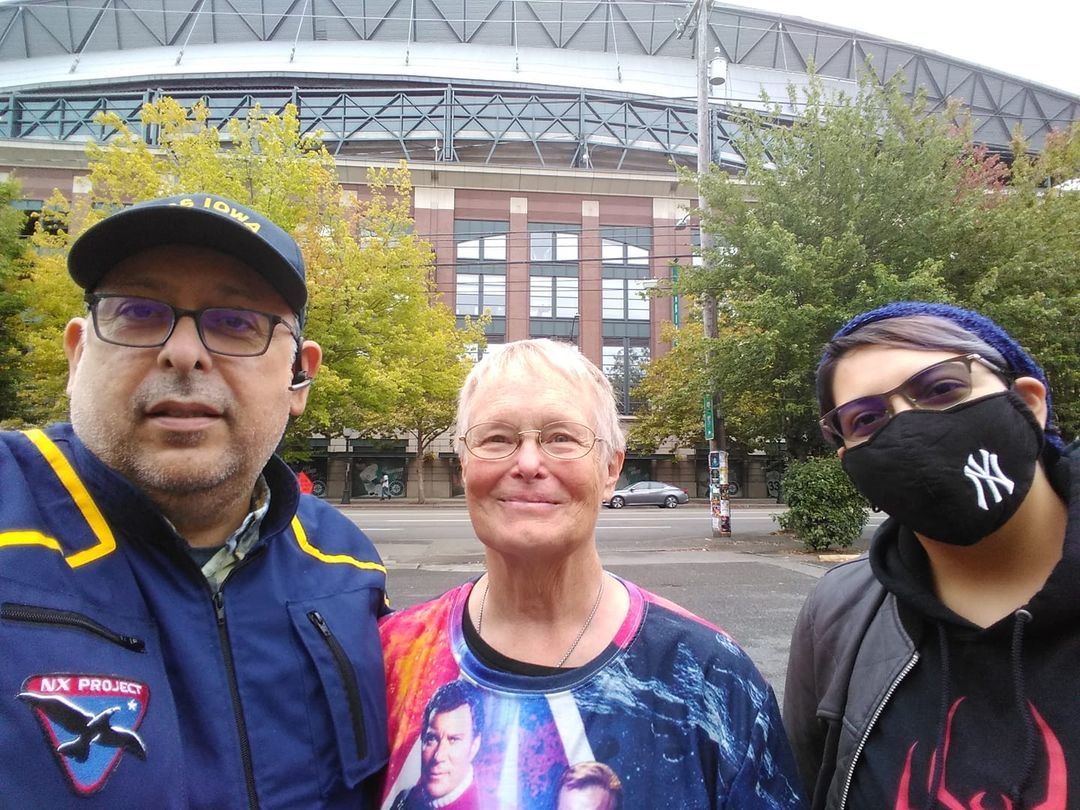 I just spent the morning with Roger D. Noriega and one of his daughters, Rosalina Knight, who goes by the nickname “Geemo” (not sure how it’s spelled).

They got in before the scheduled arrival time, which was almost exactly the same time I arrived, because by the time I parked, visited the bathroom, and texted Roger as to my location in the airport, I got a text back saying, “We’re here!”  And within 30 seconds, we were together in person for the first time ever!  (We’ve been Facebook friends and fellow social justice advocates since at least 2009, so we go back a long way, for never having met before.)

After connecting, we decided to leave the airport because it was so people-y and Geemo hasn’t been fully vaccinated yet (she did get tested 48 hours before flying, as required, and was negative and she isolated during the 48 hours before they flew).  (This was her first flight ever, I learned, and she admitted to being anxious most of the way.)

I drove to IHOP about a mile away from the airport (the long way around, though, because the exit from the parking garage spat us out on the road to I-5, so it took us fifteen minutes to wend our way back around and get to the restaurant). It wasn’t heavily populated when we got there, but by the time we left 90 minutes or so later it was getting crowded, so we decided to get back in my van and drive up to the Space Needle so Roger and Geemo could see and photograph it up close and personal. Roger got a great shot of it.

Then, because we knew there was construction and an accident on southbound I-5, Roger found an alternate route through downtown on his smartphone that would take us right by the stadium where they were planning to spend the afternoon watching Seattle play baseball against Arizona, so I drove them right to their location. We took a few selfies there and Roger gave me the closest/fastest directions about how to get to I-5 going south toward home in Tacoma while bypassing the road construction and crash sites.

We waved goodbye, and I followed Roger’s directions to the southbound exit, only to discover that that exit (Edgar Martinez) was closed due to construction, too, so I wended my way around and got back to the stadium where I had dropped Roger and Geemo off, figuring I’d just get back on that street and take it south until I could find an on ramp farther south to catch I-5.

After about 15 minutes of that, I had seen no on ramps, so I turned around and decided to retrace my drive back to the Space Needle and access I-5 there.  But I got my wires crossed at some point and ended up very near where the cruise lines were docked.  I recognized that area, having cruised from there to Alaska in 2004 and having driven other cruise-taking people there, and found my way, finally, to an access ramp that wasn’t under construction.

As soon as I managed to hit I-5, it was smooth sailing all the way home, but I think it took me, all told, an hour and 15 or 20 minutes to find an on ramp that wasn’t closed for construction. I didn’t panic a bit: I just kept driving.  (I’ve been “lost” in Seattle in this way before, but never feel frantic because I can almost always SEE I-5 and know it’s “right over there” and that I just need to keep driving until I spot a sign that leads me there. Unfortunately, THIS time some of the signs leading me to southbound I-5 didn’t tell me they were closed or direct traffic to alternate options…. so I had to keep driving…and driving… and driving!)

We had a marvelous time, and Roger says they’ll come back again sometime next year when there is more time and no baseball game to take in. We were in constant conversation every moment we were together, so we got a lot said, and it felt very much like we have known each other for years. It was a wonderful way to spend a rainy Sunday morning. Roger LOVED the rain and coolness.  Yesterday in Pomona it was 97 degrees and their air conditioning was broken (it’s fixed now), so this felt like heaven to them! It was a refreshing change for us here in the Pacific NW, too. We went close to 100 days without measurable precipitation recently, so I loved the rain, too!

Now I have two terrific new people to claim as personal friends!!!