GEORGE and RICK by Alex Gino 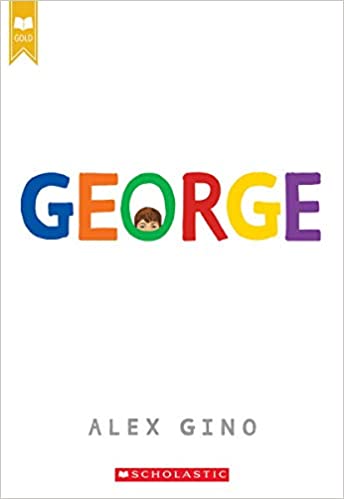 I’ve just read GEORGE and RICK, two books by Alex Gino. I wish there had been books like this at Scholastic when I was growing up, to help explain to me who I am and that there were others like me, but there are now, so I’m overjoyed for the LGBTQIA+ kids who are growing up now…

(Side Note: Sadly, George and Rick are two of the most “objected to” books that Scholastic puts out. The objectors? The usual suspects: far-right fundamentalist Christian parents, which means they’re especially crucial to their children, who may be hearing trash talk about their particular letter in the LGBTQIA spectrum at home, IMO!) 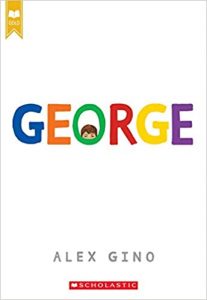 George is a transgender girl, and at no time in the story is she ever identified by the author as a boy, even though she was AMAB (assigned male at birth). When we first meet her, she’s in fourth grade, so nine or ten years old.

Her mom, her brother Scott and her friends all refer to her as “he” “him” and “his”, but the author truly “gets” it and calls George (the name given at birth) “she” and “her” throughout.

So as the reader begins the story, the first time you encounter “her” and “she” in connection with the name “George”(unless you already know what the story is about) , you think, “What an odd name for a girl!” but then you think of “Michael”, “Marion”,  “Kris”, “Casey” and “Jamie” and you think, “Okay…different strokes for different folks!”

But within two pages you understand… George is hiding her secret, thinking she’s the only one who’s in the fix she’s in.

Underneath a stack of stuffed animals and other stuff she has been given throughout her life she keeps a satchel with magazines that girls love… about cute dresses, hair cuts, makeup.  She’s terrified someone will notice this secret stash, so when her mom suggests she get rid of the pile of stuffed animals and other stuff that she no longer pays any attention to, George objects, knowing that reducing the clutter will make it that much more likely her secret stash will be discovered.

I won’t give away the farm here, but the book goes on to include a story line that tells of the class project– a live performance by the class of Charlotte’s Web. George wants to be Charlotte in the worst way. He loves Charlotte to death and wants to portray her, but…. everyone in class sees her as a boy. She’s dressed like a boy. Her hair is short like a boy’s. She has always  been designated a boy when the class was split into genders.

But she believes with all her heart that if her parents, teacher and classmates could see her, just once, as the girl she really is, she might be able to tell them the truth about herself–or they might discover it on their own and embrace her essence.

It scares her to audition for that part, but she goes ahead and does it anyway…

When she does, she does a great job, but the teacher refuses to cast her in that role but offers her a male role instead. She refuses the offered part and gets down in the dumps.

Her best friend–another girl with whom she has shared her secret– who has landed the part of Charlotte, offers to let George perform in the role during the second performance.

They know it’s going to throw everybody in the cast for a loop, but the audience (except for George’s mom, who will be very surprised indeed!) won’t be any the wiser because no one will know a “boy” is playing Charlotte.

I won’t tell any more. I don’t want to be a spoiler. Get the book if you want to find out what happens…

In the book RICK (by the same author), George (from the first book) and Rick are entering middle school and will have nearly all new classmates. George has transitioned optically to Melissa and Rick keeps her secret so she can strategically tell whoever she trusts (as so many transgender individuals do; no one should “out” trans people except trans people themselves).

But Rick has a secret, too. He isn’t “evolving” into a hormone-driven teenager like his peers all seem to be. He doesn’t feel sexually or romantically inclined toward anyone, male or female. And he’s finding it harder and harder to hang with his far more aggressive, bullying friend, the one he grew up with playing video games and doing other stuff, all of the questionable stuff at the behest of his rude, uncouth sidekick.

The school starts a rainbow club for LGTQIA+ students and Rick is drawn to it because he has questions about why he’s so unlike his now-hormonally-driven peers. He also wants to support Melissa and others who are on the spectrum, as he has no antipathy toward them. But boy howdy his “best friend” does… and sets out to harass, bully and demean them (anonymously, of course, like most bullies, expecting Rick to go along because he doesn’t know that Rick is part of the club).

I won’t tell you how RICK ends either but the rainbow club discussions are informative and fascinating.  Anyone who is on the spectrum or questioning their own place on it will find it very helpful and the author adds info at the end of the book so readers have other sources to visit if they have more questions or want to join a similar affirming club.

I came away from reading these two books feeling satisfied story wise and a good deal wistful for not having had books like these when I was first coming to terms with my gender dysphoria and transgender nature.  I’m super glad today’s kids do.

Infinite diversity in infinite combinations isn’t just for Vulcans. It’s for any civilization that professes to call itself  one.

Being civil to one another should be a general practice, not an aberration. Sadly, in today’s world (at least here in the US), it seems to be the exception rather than the rule.

I hope books like GEORGE and RICK help mitigate the damage and danger that people are inflicting on others who don’t look, think, or love the way they do.