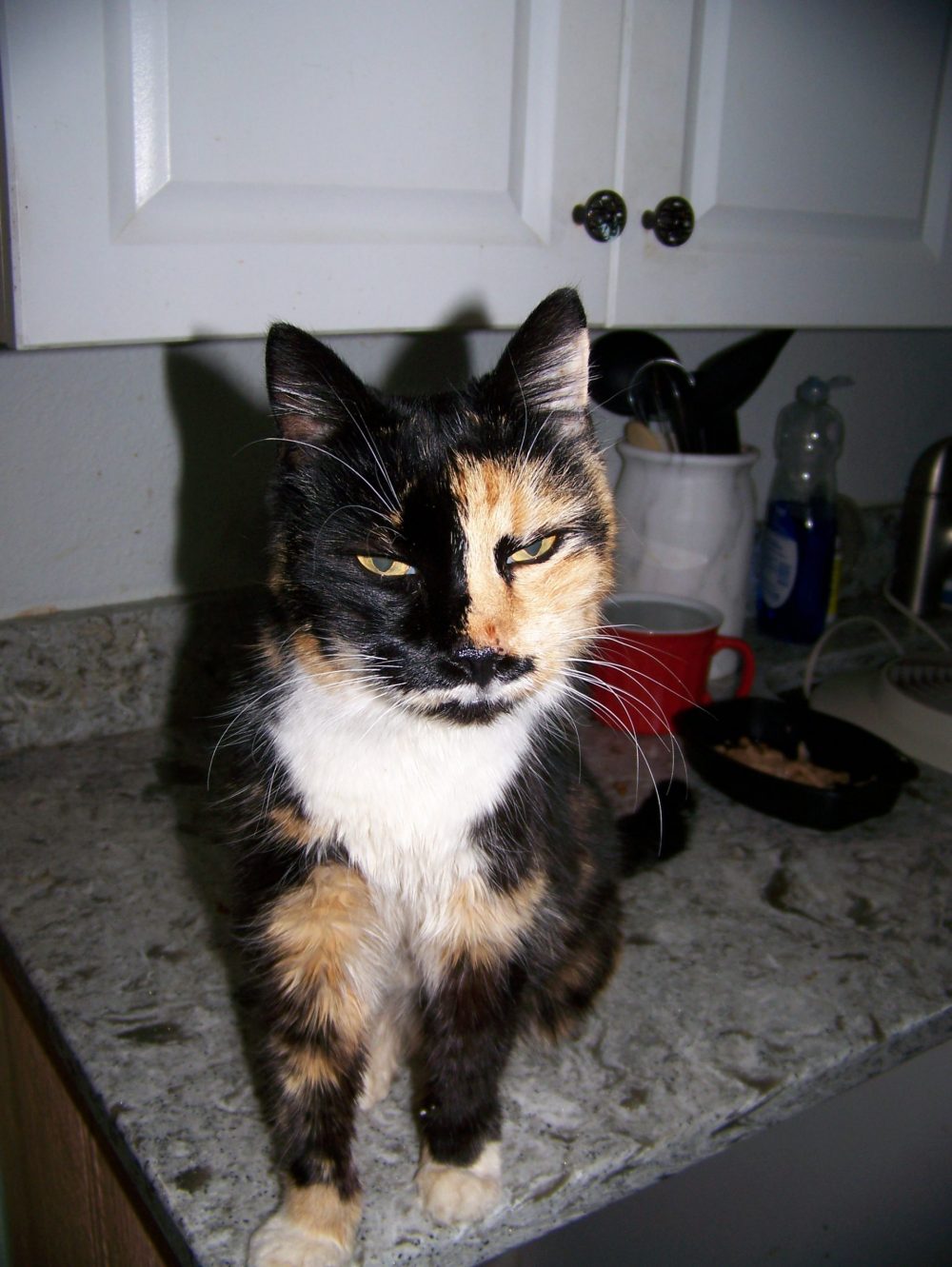 January 8, 2021 / Comments Off on Bloodwork for Patches

Today I’m taking my cat, Patches, in to her vet for bloodwork to see if she’s healthy enough to undergo radioactive iodine treatment to destroy her hyperactive thyroid.

She’s at least 15 years old, so the vet wants to make sure she’s healthy in all other ways before she undergoes radiation treatment, because it wouldn’t make much sense to spend $1500 if she’s terminally ill, or a short-timer, for some other reason.

Patches acts young. She’s chatty, active (well, as active as cats are!), and bright-eyed. I think she’s fine except for the thyroid, which came very close to killing her last month just before Christmas.

Apparently, hyperthyroidism in older cats is pretty common. I wasn’t aware of that, as I’ve never had one (that I know of) with the condition.

Patches’ symptoms were horrendous. Over a period of a few weeks, she lost weight, became weirdly matted on her tummy, and finally began to mouth-breathe heavily, often drooling, and she was insatiable: I couldn’t keep enough food in a dish to keep her happy. I figured she had cancer.

I had to buy baby food because she couldn’t get cat food down (past her enlarged thyroid, I later learned). And she would only move to use the litterbox; otherwise she was plastered to the coolest surface she could find in my home: my quartz countertops or the stove top over the (cold, obviously) burners.  She had a fever. Sometimes she’d go just outside the kitty door and lay on the cement sidewalk in freezing weather.

I was sure I was going to lose her, but I decided to call the vet anyway, to see if there was anything that could be done.

The vet diagnosed her instantly, put her on some thyroid pills, and sent her home, not wanting to take blood at the time because he thought the added moments of stress would likely kill her.  So he had me take her home, give her pills twice a day, and see if she got enough better so he could eventually take blood to determine her baseline health.

She recouped amazingly well.  Within five days, she stopped mouth-breathing and was breathing less rapidly. She began to self-groom, chat and wander around again. I have been grooming her underbelly, off and on as long as she allows and enjoys it, to get rid of the matted fur, which isn’t dirty, it’s just clumpy for some reason. (This is typical in hyperthyroid cats, I’ve learned.)

So, this afternoon we’re going back to the vet so he can take some blood and ascertain her baseline health absent the hyperthyroidism. If that checks out okay, I will schedule Patches to have the radioactive iodine treatment done at another facility where that kind of thing happens regularly.

Patches will have to remain at the facility for three or four days until her radioactivity level is deemed low enough for me to bring her home. While there, she will be closely monitored by people in protective gear (and what? Geiger counters?).

When she comes home, I won’t be allowed to pet or interact with her for more than ten minutes every 24 hours, and her litter pan and food dishes will have to be handled with gloves so I don’t get any radioactive residue on me.

This protocol will happen for 80 days after she comes home.  She is NOT going to be a happy camper because, although I probably don’t interact with her more than 10 minutes a day (I’m talking hands on, not feeding her or chatting with her in the same room), she likes to sleep on my pillow next to me at night…and that cannot be allowed for almost three months after I bring her home.

So, I’m going to have to put her in a kennel or isolate her in another room so she can’t come in to sleep with me.

And I don’t know if I will need to get her a single-cat litter box. I need to ask if the other cats can use her litter box and dishes, or if I need to isolate them from her. (They don’t sleep with or interact with her otherwise, so that’s good.)

Anyway, I’m hoping all of this comes to pass because she’s a great cat (aren’t they all?) so I want to give her a chance to live a record number of years, and if her thyroid is the only thing that can prevent her from doing that, I’m all for finding a way forward that will allow her to do that.

The problem is MONEY.  $1500 is a lot of money and I need to have a root canal myself pretty soon. That will cost anywhere from $800 to $2200 because the porcelain veneer that covers the tooth may have to be removed and if that happens, it probably can’t be saved to apply again, so I’ll probably have to pay $1200 for a new one… maybe more, since it’s a front tooth and I don’t want to be toothless in front.

So, it’s money crunch time.  Unless my root canal issue goes supernova and becomes a medical emergency, Patches’ need comes first because hers is a present medical emergency. Hyperthyroidism, left untreated, can kill her, and the less expensive alternatives to the radioactive iodine protocol end up costing far more over time because she would need frequent vet checks and blood draws to make sure the pills weren’t destroying her other organs. So, yeah… the radioactive thyroid treatment (once and done) is the best route.

I’m just hoping she’s well enough otherwise to make moving forward with the procedure sensible. That’s the sole hurdle standing between where she is now and getting it done…. that and the cost, but friends have already said they’ll help us out if I put up a GoFundMe campaign, so I’ll do that if all goes well today with the bloodwork.