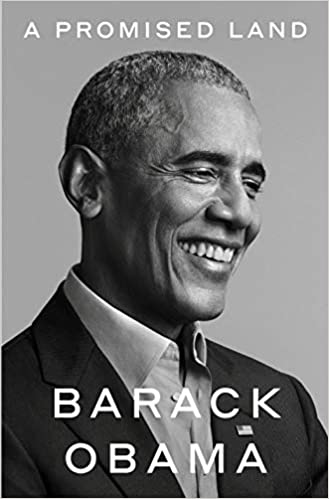 I had every intention of writing a blog post here earlier today, but then I got a new client, so I ended up spending about two hours reviewing his source materials and writing for him (earning $250 in the process), and by the time I finished that (I’m waiting for his revisions now–he says he has a few), my writer lust went away.

This morning bright and early I bought two bales of straw so I could put new bedding in the goats’ shed and outdoor calf-sized “igloos” (of sorts) so they could get high and dry when they rest and sleep again tonight.  It has been raining buckets, off and on, here in Tacoma, and goats hate the rain, so they’ve been as sequestered in their sheds as I have in my den (but for nowhere near as long) and I wanted them to be cozy there.

I’m reading Barack Obama’s new book,  A PROMISED LAND, which is actually a two-parter because he can’t shut up any better than I can, once I get going.

But the good news is that his book is extremely well written. He delves into his life as a budding politician and then on into his presidency from “behind the scenes” and tells about how he felt swept along as much by the response and dedication of his young followers as by his aspirations for himself and the nation as a whole.

It’s a fascinating journey.  It’s especially fun because he’s as interesting to read as he is to listen to.  And we get more insight into his sense of humor and his relationships with Michelle, their girls, and so many other people we’ve heard a lot about but not known intimately.

We read “hell” and “damn” a lot more than he let on as POTUS. He was very much aware, and even in awe, of the office he held and how he needed to respond in order to present himself in ways that would honor the office, nation and people who voted for him.

Although swearing happens in very few places in A PROMISED LAND, because it arrives so unexpectedly, it makes me smile or grin every time, just as happened on the few occasions when I was with DeForest Kelley and he turned loose with some kind of epithet that I found extremely funny because of its scarcity.

(EXAMPLE: After a friend and I presented him with a bogus star on the Hollywood Walk of Fame–before he actually got one, although he knew one had been approved and was on the horizon–he called to thank me and proclaimed, “Good. Now that I have this, I don’t have to worry about that f—‘ star in Hollywood!” As an understated, soft-spoken, and pretty shy Georgia-raised gentleman, he was never comfortable receiving public accolades and he fretted for months over his impending star ceremony.)

But back to Barack…

Walking the long road (which wasn’t as long for him as it has been for many) from community organizer to Senator to President with him in this book is a lot of fun, but that’s because I know how the story ends: he wins and serves for eight years. But he didn’t know he’d win, nor did any of the people who took the journey and endured the grueling campaigns alongside him.

I’m enjoying the heck out of the book. I hope volume two follows shortly on its heels, because I know this volume, as long as it is, won’t seem long enough.

That’s what a great book does. It always leaves you feeling bereft when it ends. You don’t really want it to end.