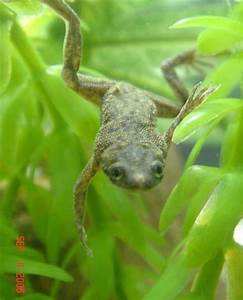 Am I the only person on the planet who thinks the heads of aquatic African frogs look like sloths?

Or that they aren’t the sharpest tools in the shed?

I set up an aquarium a couple months ago and introduced two aquatic African frogs into it.

The more I watch them, the more I realized they have faces that resemble a sloth’s.

I also realized they are not ever going to give Einstein (even though he’s long dead) a run for his money in the brainiac department.

They appear to be nearly blind (even in crystal clear water). What’s my proof? They take turns swimming up to the surface to catch food or a breath of air and then they dive, fast and furious, downward until they faceplant (HARD!) on the rocks, shells or decorative barrel below that indicate the final depths in the aquarium to which they can go before getting a black eye (if black eyes are even possible with them).

And then they lie there as if stunned… (literally stunned, I tell you!!! …) that the aquarium is no deeper than the last time they dived down (about thirty seconds earlier).

It didn’t take me long to figure out these creatures may be perfectly suited for life in a cushy African swamp, but they’re “fish out of water” when it comes to living in an aquarium with hard rocks at the bottom.

Talk about a Hard Rock Cafe’!

I feel a little sorry for them. I doubt they were imported from Africa for the aquarium trade; I presume they were born in an aquarium pretty much like the one I have here.  But their little noggins are preprogrammed to ascend and descend like tiny torpedoes, at top speed, to grab grub and air and then head south at warp speed to keep from getting eaten by someone bigger who’s equally hungry but not out of breath.

They don’t know they’re safe here and that they can slow down and be more — well, more sloth-like — and still survive.

One of mine has decided, upon occasion, to ride the back of my six inch long plecostomos, but that’s pretty much the extent of her wild ways.

And I’m pretty sure these occasional rides aren’t planned, either. I think she just ends up on him (his name is Aristotle, Lisa and I decided today) during a downward dive, knocks herself out on impact, and then “rides” him until she recovers her sense of “Oh, shit! I’m about to be eaten!”.

Anyway, my aquarium brings me a lot of pleasure, and no shortage of giggles.  Between Aristotle, the African frogs, Digger (the smaller bottom feeder) and Echo (who likes to be petted, of all things!), I have a fine time sitting before it and watching what goes on in there.

The only time I get a little frantic is when I clean the tank totally (about every three weeks), because when I get the critters back in it, they look like they’re swimming through air (which is lovely) but they also look at me as if they’re thinking, “WTH?!  What happened to all the extra food and the algae that was beginning to form in here?!  Are you planning to STARVE us now?! WE OBJECT!”

So, I put in the various fish foods (different food for different species) and watch them gobble it up like they haven’t eaten in a week, and then they look at me again like, “That’s IT?!”  They look like that Mervyn TV commercial from years ago, where the lady had her face up against the door mouthing, “OPEN! OPEN! OPEN!”

And for the next several days after cleaning the tank, Aristotle acts frantic. He thrashes around sucking on the aquarium glass, the shells, the aquatic plants, the other accessories and even the slim wire that holds the aquarium thermometer sensor underwater, searching in vain for the particles of food and algae that were so plentiful until I had the audacity to oust him and all his buddies for 45 minutes while I cleaned the tank…

So, I feed him extra because when Aristotle isn’t happy, ain’t nobody happy–not with a whale thrashing about in their underwater world…